Washington Post Pulitzer Prize-winning columnist Philip Kennicott on the Mattachine Society of Washington, D.C.’s amicus brief in the same-sex marriage cases at the Supreme Court today: “an insider’s look at how the fear and hatred of gay people was codified, disseminated, defended and adapted after homosexuals were officially banned from government service by President Dwight D. Eisenhower.” 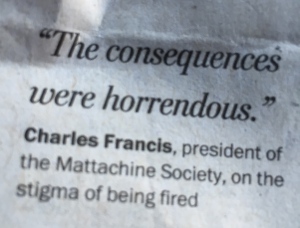 About the Mattachine Society

MSDC is organized and approved for charitable and educational purposes as a 501(c)(3) of the IRS code, and is incorporated as a non-profit corporation in the District of Columbia.